Catching Up: Breakfast With Old Friends 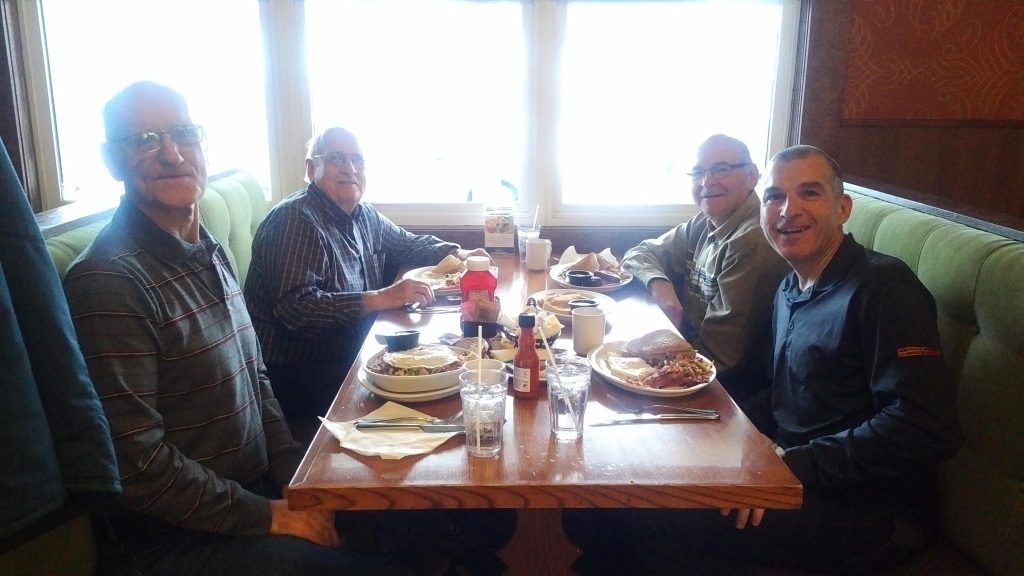 Art recently spent a winter morning in a fun and retrospective way by taking three of our retired tradesmen out for breakfast. Over the 75 years we have been in business, without a doubt our amazing staff have made us who we are!

“It was fantastic to connect with these guys who shared great memories of their time at MSM and what they are up to now. And they were thrilled to hear and be a part of our giving back efforts to celebrate this great milestone.

Here are a few stories they shared:

Dave shared of a time that he was wrapping up a job and had just finished painting the railing on a porch. With the can of paint still open, he tripped on a rock driving the 3/4 full can of paint straight into the ground splashing the paint into his face and everything behind him including the porch he had just stained. He said it was quite a chore cleaning up the porch and he wondered how many people he frightened as he drove home with his face still covered in paint!

Dave is enjoying his retirement with travel and even does some handyman work for another client of ours who runs a business with several locations that need odd jobs completed.

Clare talked about Menno and how often he would be recognized in the community and asked about various projects to look at. He recalled one of those interactions where someone asked Menno how much it would cost to build a new house and with some basic information from the potential client, Menno gave him a price on the spot.

Clare is enjoying his retirement with odd jobs and relaxation (which he still finds difficult to do). He and Dave often worked side by side on the job and even now, Dave will call on him to help with his handyman work.

Elroy told a fun story of a time before he started at Menno Martin. He worked around the corner from us at Kraemer Woodcraft and recalled many times that Menno would call to ask if he could borrow Kraemer’s wheel barrow for a job. Dan Kraemer always obliged but then one day the wheelbarrow came back with hardened cement all over it and mud that Elroy had to clean. Dan saw the effort that Elroy had to put into cleaning the wheel barrow which prompted him to call Menno to tell him that his business must be doing well enough by now that he should buy his own wheel barrow!

Elroy unfortunately needed to take an early retirement due to his bad knees. He said it got to the point where he was walking on all fours to get up a set of stairs. Laverne and the team were very gracious in sending extra guys to set up tools and carry material so Elroy could work but that could only last so long. Elroy and his wife have spent the years since volunteering at the Elmira Food Bank which has been quite a rewarding experience for them.

It was great to connect with these awesome folks and treat them to breakfast, and hear their fun stories about their time with Menno S. Martin Contractor.”

We’d love to hear them. Please email Art, or give us a call…help us celebrate 75 years in business.

Random Acts of Kindness with Jordan and Jeff

As we are sure you can imagine, right now we’re experiencing the occasional delay with delivery of products from suppliers and extended lead times for certain services as we do our part in keeping properly distanced as we work.

As always, your safety, and the safety of our team, is of the utmost importance. We are taking every care to ensure that all protocols are followed while providing outstanding service and Putting People First in everything that we do.

Your request is important to us and we kindly ask for your patience in getting back to you as we work to service our current clients and support our staff, partners and our community during this time.